Carol is a trained Medical Laboratory Scientist and a Zone Certified Instructor with extensive experience. This knowledge fits perfectly with the requirements necessary to work with her clients in the Zone Nutrition programme at ProZone

Like many other people Carol and her founding partner, Kevin, had tried many diets, mainly to eat well and be healthy as well as manage their weight.  For over 10 years they had followed conventional nutritional advice based on the “Healthy” Pyramid – eating carbohydrates like bread, rice and pasta with a small amount of lean protein and very restricted amounts of fat.

But it just didn’t work. Kevin was significantly overweight and his cholesterol and blood pressure were high. Carol was starting to put on weight and was suffering from allergies and asthma.

They got into the Zone in March 1997 and never looked back. 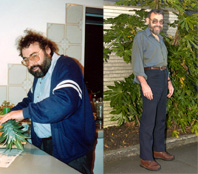 Kevin before & after The Zone.

Kevin shed 23 kilos in the first 6 months and his cholesterol and blood pressure dropped. Importantly, Kevin has effortlessly stayed at his ideal weight and continues to enjoy his improved health in the following years to the present time. Carol reversed her weight gain trend, stopped suffering from allergies and is no longer an asthmatic. Both love their easy, enjoyable Zone eating lifestyle.

In September 1999 Kevin and Carol attended a Zone instructor’s course in San Francisco. On passing the exam they became the two of the first Certified Zone Instructors in Australasia. In 2001 they refreshed their knowledge with an advance course taken by Dr Barry Sears (creator of the Zone). They also attended the 1st International Zone Conference in Mexico in 2004. Carol and Kevin have met with Dr Sears several times for social and business purposes.

Kevin and Carol have had over sixteen years experience of eating in the Zone themselves and simplifying it for others. They have developed concepts, aids and a book to make it all enjoyable and easy. Kevin has had a large number of articles published internationally and has been consulted by people from all over the world on Zone matters.

There are critics of Zone Nutrition but these are getting less and less as more research is being done and more is understood about nutrition and how our bodys work. Informed opinion is unequivocal. Following is what leading New Zealand diet expert, Dr Jim Mann, Professor of Human Nutrition at Otago University, has to say about the Zone: ‘It makes good sense in terms of nutritional principles’, ‘It is often associated with impressive weight loss’ and ‘I know a lot of people who have done well on it’.

Science aside we simply stand by the results. We see a large number of people every year and 80% to 90% of them are referred by word-of-mouth from our happy clients. By late 2006 we had worked with over 4000 people and every one that has seriously (and many not so seriously) adopted Zone Nutrition has been delighted with the results.

Get into the Zone and see for yourself just how good it feels.

Kevin is no longer involved in the daily running of ProZone but remains involved in his role as technical advisor and is a regular contributor to our blog.

Kevin has had a large number of original items and articles published over several years in his regular weekly column called ‘Zoning Down Under’ in the original ZonePerfect Newsletter. This newsletter disappeared after ZonePerfect changed hands in 2004. This change of ownership saw a move away from teaching and expanding the philosophy of Zone Nutrition by the ZonePerfect organisation..

When the articles were first published they created tremendous interest from Zoners and we received a large number of emails with compliments, comments and questions from all around the world. A lot of the material is still relevant today and we welcome your comments and feedback. Below are some of these newsletters divided into categories for your convenience.