Consumer has tested and commented on 35 snack bars sold in New Zealand.  it quite rightly says that most are high in sugar and saturated fats and are unhealthy.

Consumer used the new health star rating system which has been introduced by the government.  It is a label on the front of the pack which gives consumers an “at a glance” guide to the nutrition value of food with five stars being the healthiest and one star being the most unhealthy.  Nine of the 35 bars received 3 stars or more with only four bars gaining four stars or more.

Kellogg’s Nutri-Grain Bar Original got a one-star rating because it was more than a third sugar and contained high levels of saturated fat.  The Quaker Nut Bar Macadamia & Apricot got the highest rating of 4.5 stars.  It was high in total fat but had less saturated fat, sugar and sodium than many other snack bars and had plenty of fibre in nuts and fruit which made up 48 percent of its ingredients.

While the study of the healthiness of snack bars is commendable and the outcome is inevitable, the investigation is flawed as it concentrates on fibre content and persistently refers to the presence or absence of fruit as well as fat levels.  Fruit, especially dried fruit, which is often used in snack bars, is high in sugar.  At the end of the day it is sugar that makes you fat, not fat.  While there is no merit in eating food that contains saturated fat we are not hung up on eating fat but if you eat too much fat you will use that instead of your body fat for energy.  In the Zone we switch our body form storing fat into burning fat for energy.

The worry is who is deciding on the parameters of the health star rating system.  At the end of the day if you want to eat a properly balanced snack (which could be a two block lunch), eat a Zone bar.  They are useful to keep in your bag to have at the ready if you get caught up in a meeting, are travelling or just feel hungry.  At the cost of $3.80 each if you buy a box, that is less than a cup of coffee.  The PureFit Zone bars are gluten free, dairy free & vegan but are perfectly balanced for the Zone and they come in 6 delicious flavours.  I am happy to mix boxes with your favourite flavours.  Go to the shop either directly from the website or at https://prozone-store.myshopify.com 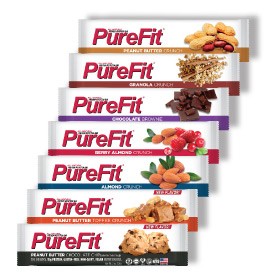 ProZone clients can explore our blog which is updated regularly with tips, recipes and New Zealand focused shopping suggestions.

Interested in becoming a ProZone client? Book a consultation with Carol.